Our mission is to win the hearts, minds and material support of individuals and organisations, wherever they may be, for the conservation, cultivation, study and wise use of the indigenous flora and vegetation of South Africa.

The Kirstenbosch Branch of the Botanical Society of South African is a member-based organisation striving to be part of the solutions to biodiversity challenges in the greater Cape Metropole and beyond.

The Botanical Society of South Africa

There would be no Kirstenbosch National Botanical Garden without the Botanical Society of South Africa. The history and development of both are inextricably linked.

The land for the Garden was granted on condition that a civil organisation be formed to support the development of the National Botanical Garden. The Society was formed in June 1913 to encourage the public’s involvement in the development of Kirstenbosch, to augment the Government grants, to organise botanical shows, and to enlighten and instruct members on botanical subjects. These aims are virtually unchanged today and the Botanical Society has grown with the old NBG and now SANBI to extend its support to the nine other National Botanical Gardens as well as Kirstenbosch.

The Kirstenbosch Branch is steered by a volunteer committee elected each year by members at the Branch AGM.

A team of eight full-time and part-time staff take care of the administration of the Branch Office and the two Bookshops at Kirstenbosch.

Over 150 Volunteers assist with projects, the annual Plant Fair, and with work on the Kirstenbosch Estate.

Plant diversity underpins the functioning of all ecosystems which provide the fundamental support systems upon which all life depends.

Habitat destruction from human activity is the primary threat for 83% of endangered plant species. Plant diversity is being lost at an alarming rate.

It is estimated that at least 25% of the 400,000 plant species in the world are now threatened with extinction due to habitat loss and degradation.

The deliberate or inadvertent introduction of alien species has altered many native ecosystems and resulted in the decline of many native species.

An increase in temperature of 2-3°C over the next hundred years could result in half the world’s plant species being threatened with extinction.

For each job dedicated to protecting biodiversity there are five that depend directly on using biodiversity, estimated at almost half a million jobs.

At the Botanical Society we believe that we all have crucial role to play in ensuring that we conserve plant diversity for the benefit of all.

The Cape Floristic Region is home to over 9500 plant species, with floral diversity, density and endemism among the highest worldwide. 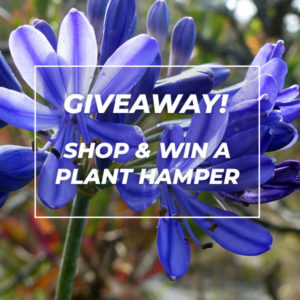 You could be the lucky winner of a Strelitzia reginae, Oldenburgia grandis, Agapanthus Africanus and Erica verticillatus, by simply shopping at our 2021 online Plant Fair. All you need to do is fill your virtual basket and buy indigenous flora, books or even soil from our online shop between 4 June – 6 June.

The winner will be randomly selected from our online shop, and announced on Monday 7 June. T&C’s apply.